If you don't know me,  I am a semi-retired college professor and digital graphics professional who was disabled by a stroke in my 40's, despite good health and no history.  but this story is not really about me; it is universal.

I was motivated to finish this, although working on it for a while, by a twitter comment I saw a few days ago: "No filter, say what you feel".  It made sense in context.


I've always tried to "say what I mean and mean what I say".  No white lies or backing away from the truth..."What a tangled web we weave etc. etc.  My ingrained sense of humor often warps this in ways other people may find offensive at times.  But I say it with a smile, and if it sounds offensive to them, they should call me out on it, which they often do.  If not it remains their problem, not mine.  I have often called people out on things I find offensive, and if a joke, point out that it is not funny.

One consequence of stroke is the effect on executive function, meaning decision-making, working memory, difficulty with transitioning between tasks, organization, control of impulses and emotional responses.  There are more.  See below.  As my filter  is now damaged, my innate "damn-the-torpedos" nature takes over.

Okay, let me get to the point here...

I have some trouble walking because of the stroke.  Living where I do, I am extra careful when weather creates obstacles.  However I consider it good for me, holistically, to get out of my climate-controlled building every day.
Posted by Bruce Gionet at 7:11 PM No comments:


I graduated college in 1979, and even by then it was clear that wearing blackface or Klan garb was NOT funny, but offensive, and not just in the north.  Although many have raised the point, with which I generally agree, that one should not be held to the standards of today for past bad behavior.  If so, no one would run for office -- we all have skeletons.  And it is politics, where mud-slinging is an honored tradition.

But this is a rare case, in which the actions of a young man should make us wary of his judgement later in life.  There seems to be no doubt as to him doing this.  And no one called him out on it because, oh, we were all drunk, young, and clueless.

But by then, there was enough obvious controversy that it's hard to believe a smart med school student would be unaware enough to do it twice.

The sixties and seventies turned everything upside down.  Despite that, there were many cases of poor judgement on the issue of race:

Joni Mitchell, of all people, went to a party in blackface in 1974.  And she was not widely criticized, despite that her next album cover featured a photo of her in this same costume.

But there were many who realized the insult of blackface, including this 1977 decision by U.S. Postal Service, surprising to us New Yorkers as the complaints were in "several southeastern states": 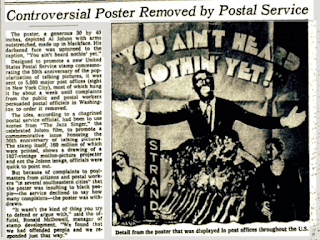 If you need a subscription to read this article, here's the guts of it:


The poster, a generous 30 by 40 inches, depicted Al Jolson with arms outstretched, made up in blackface. His darkened face was upturned to the samera. “You ain't heard nothin’ yet.”
Designed to promote a new United States Postal Service stamp commemorating the 50th anniversary of the popularization of talking pictures, it was sent to 5,000 major post offices (eight in New York City), most of which hung it for about a week until complaints from the public and postal workers persuaded postal officials in Washington to order it removed.
The idea, according to a chagrined postal service official, had been to use scenes from “The Jazz Singer,” the celebrated Jolson film, to promote a commemorative issue honoring the 50th anniversary of talking pictures. The stamp itself, 160 million of which were printed, shows a drawing of a 1927‐vintage motion‐picture projector and not the Jolson image, officials were quick to point out.
But because of complaints to postmasters from citizens and postal workers “in several southeastern cities” that the poster was insulting to black people—the service declined to say how many complaints—the poster was withdrawn.

“It wasn't the kind of thing you try to defend or argue with,” said the official, Ronald McDowell, manager of stamp development. “We found that we had offended people and we responded just that way.”

Now this was probably not on the radar of a college junior, but we did have a showing of "Reefer Madness" in my dorm, in which marijuana was shown as the fuel for black musicians playing honkytonk piano.  I knew this was racist, but not an unusual depiction at that time, about which I was uncomfortable (as a weed-smoker probably).  I knew few black people then, although the ones I did were fairly accomplished.  But I knew even as a child that there was something bad about the depiction of Spanky in "Our Gang", on the rare occasions when I watched it.  Being raised as a JFK Catholic may have had something to do with my discomfort.

My point is that the skill of Judgement is learned, not given, and if you don't learn it by Med School, you are unlikely to improve.  As with Sexual Harassment, that argument of "but that was years ago" just does not wash anymore.  That goes for Republicans AND Democrats.  How much has #45's judgement changed since his pussy-grabbing days?

Gov. Nothram should resign honorably, be thanked for his service, and study black history.

He can start here:
A very good report on the history of blackface (make sure you watch the video)
https://www.cbsnews.com/news/history-of-blackface-unmasking-the-racism-reignited-by-megyn-kelly-controversy/

and then to bring him up to date:
https://hyperallergic.com/476097/prada-accused-of-blackface-pulls-controversial-animal-charms-from-retailers/

Posted by Bruce Gionet at 10:44 AM No comments:

wtf i'm slow. I forget the granular nature of this environment like some
Posted by Bruce Gionet at 10:20 PM No comments:

Wish I could weave stories ;ike Henry Rollins
Posted by Bruce Gionet at 10:11 PM No comments:

Email ThisBlogThis!Share to TwitterShare to FacebookShare to Pinterest
I did not know bloggr was an actual thing. I thought it was just a meme, I guess,
Posted by Bruce Gionet at 10:01 PM No comments:

Today's topic is one more step in the seemingly relentless erosion of the rights of the public as a group, not just individually.

The artworks in the Art Museum of my youth are being auctioned to provide dollars for a proposed expansion, as well as to cover a supposed operating expenses shortfall, neither of which were the intentions of e donors.  This move has been opposed strongly by members of the community and of the art world.

below is my letter to the local newspaper, the Berkshire Eagle:

To the Editor of the Berkshire Eagle:

I was saddened and then appalled when I first heard about the sale of the 40 works of art from the Berkshire Museum.

I was raised in Pittsfield, and still think of Museums as places of worship.  One important gift upon moving to New York City in my twenties (to pursue a career in art and design) was the number and variety of museums.  I have visited many if not most of the art museums, which the time spent at my hometown museum taught me to value.

But no matter the type of museum, the elimination of assets without the participation of museum members and ignoring the interests of the community is a travesty and shows disdain for the idea of the public trust, a concept being chipped away at an increasing rate recently. Many of these artworks were gifted with the expectation, for some contractual, that they would be viewable by the County community.

The so-called "compromise" by the Attorney General of sending some works for display in a city 300 miles away and to which Berkshire County residents are offered free admission is no compromise.

Living less than a mile from Sotheby's, I will stand proudly in front at the next sale, as a Berkshire County native, protesting the insult and sellout of the community by the Museum board. Massachusetts should take the word "common" out of Commonwealth.

June , 2018: from Board of  Museum
Berkshire Eagle stories:

Posted by Bruce Gionet at 4:57 PM No comments: