Sex is just not what it used to be

John Oliver did a great show last week about the many failures involved in teaching sex education in te U.S.

But for me the highlight of his tirade was this "period  piece" with bowling.


Here is some accurate reporting from the Los Angeles Times with the amusing cast information.
Posted by Bruce Gionet at 9:54 PM No comments:

Hold THIS (subway story of the day)

Monday, after nearly a week with my family, a long two-train ride back to Grand Central, and a two-train subway trip up to Washington Heights, carrying my small backpack (filled with only my trusty but heavy old Macbook Pro, one t-shirt, shaving kit, kindle, sunglasses, phone charger, and medications), I approached the elevator to the street, which was already packed with one tired-looking woman and her stroller, and a crowd of people who all looked healthy enough to take the stairs.

I managed to squeeze in, turning around to avoid getting my carry-on caught in the doors, fearing a potential repeat of the incident I reported in my previous "Subway Savior" post.

The well-dressed young man behind me muttered something like, "Can you move away a little?", a useless comment in the elevator, and I was not even sure was directed to me.

But his next comment was:
"Why don't you hold the backpack instead of pushing it into me?", while looking down and clearly seeing my one hand in a wrist brace and the other holding a cane.  I could not decide whether to respond with "Why don't you hold it for me if it's such a problem?" or "Hold THIS", with the appropriate gesture.

But being a good citizen, polite, and not wanted to make a scene for the other passengers, I bit my tongue.

In contrast, when I exited the elevator, after the tired mom, Mr. "Master of the Universe" and the rest of the crowd, a Latino gentleman caught me as I lost my balance and almost fell.

The good, the bad, and the ugly of NYC... at least the guy didn't push me out the doors ;)

Stay chill in the heat of the moment -) 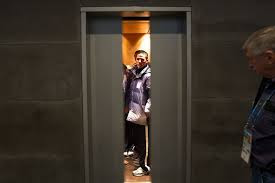 Posted by Bruce Gionet at 9:21 PM No comments: