Those who know me are aware of my zero-tolerance position on assualt weapons, [which I define as Merriam-Webster does:

any of various automatic or semiautomatic firearms; especially : assault rifle].
I have many reasons for this stance, the primary one being that I have seen no good argument how ownership of a military weapon by a citizen is protected by the law.  But one thing I know that is protectd by the law, and that all Americans should agree on, is free speech -- the first amendment.  This is the basis for Hollywood's argument that they should be free to market violent movies and video games, regardless of their influence on violent behavior, which has never been proven, despite the efforts by the NRA last week to find another fall guy.
As a digital artist and animator who grew up with the technology, I like to remind people that the ability to present convincing fantasy is a gift, but it is still fantasy, which CAN be a healthy way for disturbed or unhappy people to work out their agression  There is an easy way to separate fantasy from reality -- reality involves blood, and real people dying.  It is that simple.  You do not need a degree in psychiatry to know that; nor are you necessarily mentally ill if you cross that line voluntarily.

We are a violent species and violence is a cultural mainstay.  The second story in the Bible is about fratricide.  If Hollywood is to be restrained from making violent movies, should the Metropolitan Opera not put on productions of "Salome", to avoid a new epidemic of well-dressed women demanding men's heads brought to them on plates?  The far right is fond of using the "slippery slope" argument; I think it is entirely appropriate here.  Is the popularity of Fifty Shades of Grey leading to a dramatic increase in sado-masochistic deaths?

However, after reading the below in the Christmas Day Times, It looks like Hollywood and the game companies shot themselves in the foot:

I sincerely hope, for my friends in the industry, for gameplayers everywhere, and for those who belive in doing the right thing, that the game companies wise up, and do not assist in the marketing of "true death" to coin a phrase :)

And I would much rather see full employment in the game sector than in the gun-manufacturing sector. 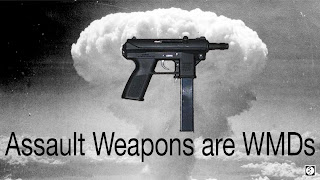 Posted by Bruce Gionet at 7:15 PM No comments:

I am saddened to feel the need to write about gun violence yet again.  But the shooting in Connecticut has brought out the same parade of gun fanatics and just plain wing-nuts. There are plenty of interpretations of the 4th amendment,  but clearly no sane and law-abiding citizen needs a weapon capable of shooting multiple rounds without reloading.  Gun-owners, let's get rational!  And to those who blame "the media" for the seeming increase in these horrific events in the belief that reporting them inspires others, may I remind you, if you are on Facebook, Twitter, Instagram, etc., etc., etc., you ARE the media.

Obviously there are huge problems to be solved here, but we cannot tackle them all successfully.

Guns ARE the problem, folks! Specifically, those that shoot many rounds without reloading. NO ONE outside of the military or a properly trained and deployed police unit needs one with that capability.

I just finished reading a blog post by a woman dealing with her own mentally ill and sometimes violent teenage son, giving an unexpected perspective on this issue:

A friend commented that it is easy to talk about gun control but harder to talk about mental health.  I believe we need to talk about both; as I heard someone say this weekend, "why does it seem easier for people to get a gun than proper mental health care?  Clearly an exaggeration, but it is a good point.  However, after reading Soccer mom's piece, which is brilliant and touching, ask yourself, "do we not owe it to society to keep weapons of mass destruction out of this young man's hands any way we can?"

I found the below link interesting because it seems to be an attempt to address the gun-control issue as a whole from he perspective of urban violence, but that is not the issue here.

Not to in any way minimize the tragedy of violence in the Bronx, but the issue on everyone's mind right now is the tragedy of the mass murder of schoolchildren in a "nice" (white middle-class) suburban town.
I would like to submit that if we cannot in any way at least minimize the toll in horrific events like this one, in relatively stable, fairly successful communities,  how can we expect to improve the situation in our inner cities?  Let's start with the small step of prohibiting people from owning WMDs, because, face it, folks, that is what assault weapons are.

Here is the project about the Bronx, well done:
Bronx men talk about guns
Posted by Bruce Gionet at 2:32 PM No comments:

smoke em if you got em

No one hates losers more than losers, as I just heard Chris Mathews say on a different  subject.  I really love the whole smoking thing, I have to admit.  Always did, cigarettes, cgars, whatever.
Posted by Bruce Gionet at 7:53 PM No comments:

Never heard of it, right?
Check this out


The following are examples of situations that may make you eligible for Disaster Unemployment Assistance:
Please note - this list is not exhaustive.  If you are uncertain about your eligibility, please apply. All applicants must submit wage information and documentation to support their application.

This is an example of the odd nature of the spread of information in "the information age".  I heard people talking about this in a bar.  No one had heard of it other than one guy, although everyone had been affected and some may have been eligible.
Posted by Bruce Gionet at 4:34 PM No comments: